Mascot Media's Lev Willey sits down with Maria Kennedy, former El Paso ISD Athletic Director, to get her thoughts on the 50th anniversary of Title IX. 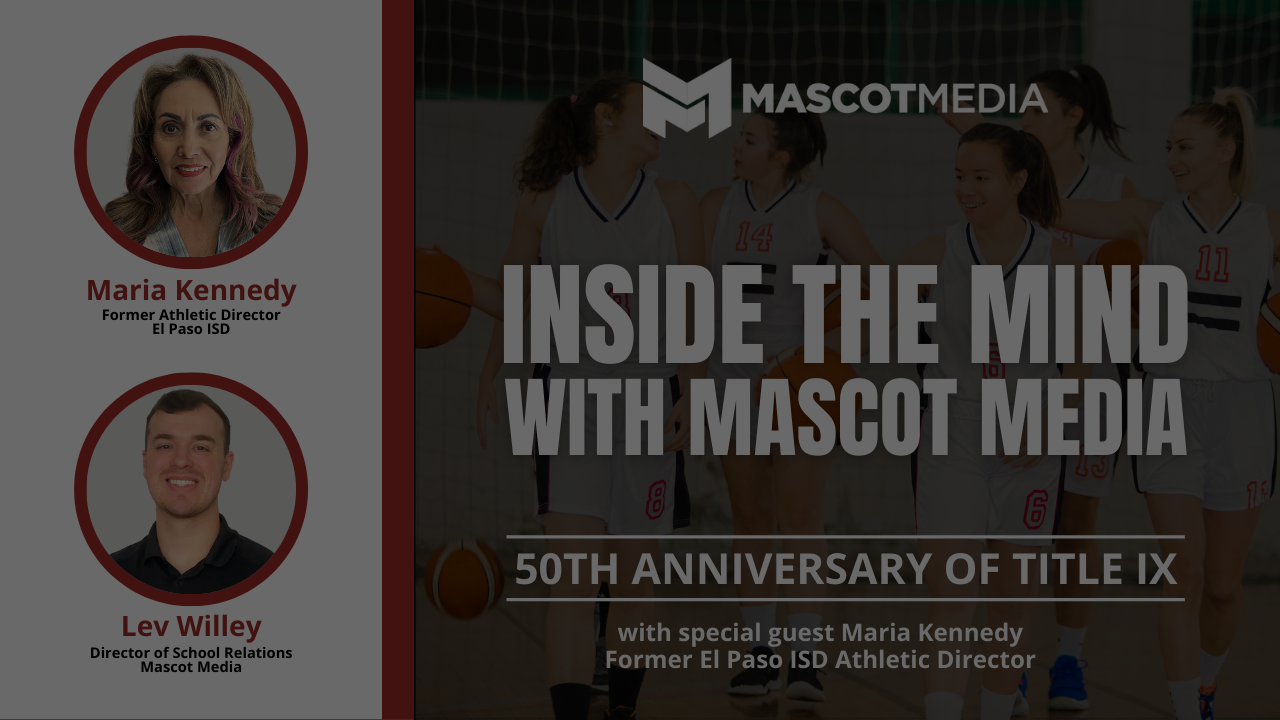 Maria Kennedy
Hi there. Good morning. How are you?

LW
I’m great – the sun’s out…it’s reflecting on me. I look a little pale, but that’s okay. That’s what the summer sun is for.

MK
You gotta wear some makeup.

MK
Sure! Well, as you just mentioned, I was the Athletic Director for El Paso ISD. I just retired – almost a year ago in June, and I spent 37 years in education. 20 of those I spent coaching and teaching from middle school to high school. And then the last 17 years of my career, I was either the Assistant Athletic Director or the Athletic Director for El Paso ISD. We have 11 high schools and 17 middle schools. We oversee every aspect of the athletic realm in El Paso ISD, from scheduling to travel to officials to you name it. Anything that entails athletics falls under our umbrella.

LW
From the first time you stepped into El Paso, from being a middle school coach, a high school coach, and entering the El Paso Athletic Hall of Fame….throughout your entire time that you were you had an impact in giving back to ALL sports. And really making an emphasis on girls’ sports and making sure they’re showcased on an equal playing field. This is also the 50th anniversary of Title IX, so walk us through it. You had so many responsibilities as the athletic director, so what was it like for you or what was inside your mind to make sure that those girls’ sports had an equal playing field, especially in Texas where football dominates?

MK
Well, as you said, 50 years of Title IX. I was actually 12 years old when Title IX was enacted. That just plays into how I grew up. The equal playing field started when I was 12 years old. So coming from a small town, it was pretty equal.

Although I will say, that my knowledge of girls’ basketball at the time was minimal because when my dad would take me to a ball game, it was probably a boy’s game. My first experience in 7th grade, I still remember the coach calling a meeting for everybody who wanted to play basketball, and I was excited, so I showed up. And she said, “How many players are there on the basketball court?” I shot my hand up and I said, “Five.” Well…. not.

During that time until 1977 or 1978 in Texas, we played 6-men or 6-girl basketball, and it was 3 half-court defensive and offensive players and 3 on the other side. So it was actually 12 players on the court at any given time. It wasn’t until my senior year in high school that they changed that rule. You can see how the dynamics of girls’ athletics changed in just a few years following Title IX.

LW
And we continue to see it evolve, right. It’s great to see on our Mascot Media properties, seeing girls be well recognized alongside, boys’ sports like football.

Also for you coming up throughout the ranks, you talked about your mentor, I believe it’s Mr. Ken Owens. Walk us through a little bit of that connection. We’ve talked offline about it a few times, but how impactful he was for you?

MK
Yeah, sure! Ken and I started working together at Urban High School as head track coaches. He was the boy’s coach. I was the girl’s coach. I had a triple jumper, and he had a shot putter (who was a state champion that year). We traveled together, got to know each other very well, and years later, we both moved on. He moved on to become the Assistant.

And of course, we maintained a relationship, but it wasn’t until he became the Athletic Director that he reached out to me and said, “Hey, are you interested in coming over?” Positions in athletics are few and far between, so I knew that if I really wanted to pursue this, I had to make the jump when the opportunity presented itself. So when Ken reached out to me, I applied and went through the whole process and became the Assistant Athletic Director under him. I have to credit him with a lot of my success because even as the Assistant, he gave me a lot of responsibilities.

He gave me a lot of freedom to implement my ideas. I had the middle schools under my direction, and I really did fight for them. When things wanted to be cut, I said, “No, we can’t do that. I don’t want to do that to our middle school coaches”. Kids really, they get so few games anyway in a season. And of course, the driving force is trying to keep them in our schools and not out on the club sports all the time. The club sports had taken so many of our kids so it was important that we had good programs, even at the middle school so the kids would stay interested.

He just let me do a lot of different things and gave me the freedom to interact with coaches, with kids, travel, and just anything that I thought I should do or could do.

LW
Unfortunately in a lot of cases, people throughout the country don’t get that blessing, but they do have the blessing of getting to visit inside your mind right now. A lot of people have the goal of being an Athletic Director and making an impact much as you did. Every time I talk to El Paso ISD and the schools in Texas, they always talk about how they know you. What would you say to people who want to get to that final point but don’t know how?

MK
I would just say to be involved, put yourself out there, volunteer for the things that others don’t want to do, be a presence, and always be positive.

And as a female Athletic Director, I think it’s really important that we are informed, that we educate ourselves, and know what we’re talking about when we go into a room. I was the Interim for 9 months before I became Athletic Director andd I really knew that I had to have the buy-in from the football coaches.

If I could get the buy-in from the football coaches, then I thought, well, you know what? I have a good chance of making this work. And I really think I did that. I showed them that I knew about football. I couldn’t coach football or draw off X’s and O’s but I understood it. I think they knew that.

But more importantly, I think we have to show we care. When I’d come home stressed about something, I’d share it with my husband or vent to him and he would vent to his friends and his friends would say “She just cares too much. Why does she care so much?” Well, how do you do a job if you don’t care? I did care.

LW
Well, that’s something that a lot of people can take and run with because it’s the little things that matter. Maria, it’s been an extreme pleasure having you on and knowing you personally. And if you all don’t know her personally, you’ll get the opportunity. You’ll run into her at one point, especially if you’re in Texas. If you’re not come on down. The weather is great right now. It’s hot.

MK
We’d love to have you.

How Marion School District Increased Sponsorships & Built Their Brand
April 22, 2021
Go to Top
We use cookies on our website to give you the most relevant experience by remembering your preferences and repeat visits. By clicking “Accept”, you consent to the use of ALL the cookies.
Do not sell my personal information.
Cookie SettingsAccept
Manage consent

This website uses cookies to improve your experience while you navigate through the website. Out of these, the cookies that are categorized as necessary are stored on your browser as they are essential for the working of basic functionalities of the website. We also use third-party cookies that help us analyze and understand how you use this website. These cookies will be stored in your browser only with your consent. You also have the option to opt-out of these cookies. But opting out of some of these cookies may affect your browsing experience.
Necessary Always Enabled
Necessary cookies are absolutely essential for the website to function properly. These cookies ensure basic functionalities and security features of the website, anonymously.
Functional
Functional cookies help to perform certain functionalities like sharing the content of the website on social media platforms, collect feedbacks, and other third-party features.
Performance
Performance cookies are used to understand and analyze the key performance indexes of the website which helps in delivering a better user experience for the visitors.
Analytics
Analytical cookies are used to understand how visitors interact with the website. These cookies help provide information on metrics the number of visitors, bounce rate, traffic source, etc.
Advertisement
Advertisement cookies are used to provide visitors with relevant ads and marketing campaigns. These cookies track visitors across websites and collect information to provide customized ads.
Others
Other uncategorized cookies are those that are being analyzed and have not been classified into a category as yet.
SAVE & ACCEPT